The term "As" or "Aesir", as it is called in English, is without doubt connected to the name of the continent "Asia". It may not be a coincidence, that the "As" came from "Asia".

The Romans also called their Asia Minor province for Asia. By the time of the Roman Empire, the Turks had not yet arrived in Turkey. 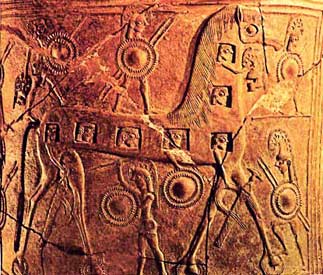 The Trojan Horse on an ancient Greek vase.

In the Province of Asia lived Phrygians, Kelts, Medes, Lydians, Ionian Greeks and many others, who all belonged to the part of the world's people, who spoke Indo-European languages. Very often, the term "As" seemed to be connected with Indo-European people. It is a very old expression, which may originate from the original Indo-European homeland. Thus in the ancient Indian language, Sanskrit, the gods were called for "Asura", and in old Persian, they were called for "Ahucra". For this reason, the Roman province in the now-a-days Turkey got its name, "Asia".

The Greeks gave the Trojans precisely a horse because they were such great horse breeders. The leader of the surviving Trojans, who escaped from the defeat, was also named Ane-as.

It may also well be, that the "Assyrians" had something to do with the case. Their name apparently means the "As", which had settled in "Syria". The "As-Syrians" was a very warlike and cruel people.

In the Caucasus Mountains on the border between Georgia and Russia, a people, who call themselves "Os", "the Ossetian", still lives. They are also Indo-Europeans. Their name means "As", it is only pronounced slightly different. They look like very ordinary Europeans. Just like our Scandinavian ancestors, they drink from horns at their parties and celebrations. In the old days, they worshipped similar gods as the Scandinavians. I visited them in the nineteen sixties.

At the other end of the Caucasus in the now-a-days Azerbaijan lived in the past the "Alans", they also called themselves for "As", just like the Danes. The Alans have had their home in the Caucasus Mountains "always", as far back as anyone could remember. 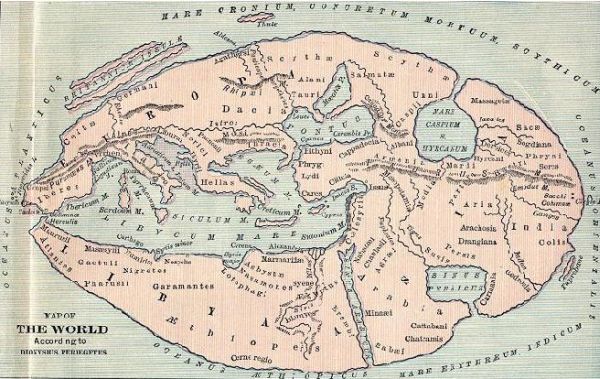 Following the ancient geographer, Dionysius Periegetes from about 300 AC Alania was located in the South Eastern corner of Caucasus.

In the year 1220 AC, however, the Mongolian-Turkish armies approached the Caucasus Mountains and demanded, as always, unconditional surrender. The Alans allied with their neighbours, the Christian Chechens and the turkish Kipchak nomads, and lined up for a final "Ragnarok" battle. However, the Mongols had made a secret agreement with the Kipchak nomads. They had reminded them of their Turkish blood and the traditional friendship and cooperation between Mongolians and Turks. Kipschaks changed side in the last minute or possibly the middle of battle. The Alans lost the battle and their old land, where they had lived since ancient times. (The Mongols Conquest)

The survivors buried their dead and departed, no one knows for sure to where. But their name "As" is still preserved in the name of the now Turkish country "Azerbaijan". Alan's graves, where they buried their dead from the last battle, can still be found in the Caucasus. (Silk Road Video)

Unlike the Huns, the Alans did not use slaves.

Stein, Le Coq, Pelliot, Kozlov and other explorers brought a large volume of documents back from Dun Huang at the beginning of the twentieth century. 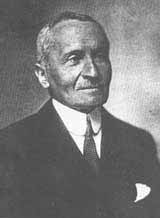 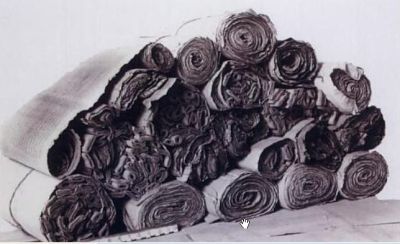 To the left the Hungarian borne explorer Sir Aurel Stein 1862 - 1943. - He was borne in Hungary but traveled for the Englishmen.
To the right some rolls of ancient documents from the Dun Huang caves.

From these, it appears, that an "Aza" people lived around the salty lake, Koko Nor, in the Tibetan highlands. Koko Nor is now-a-days also called Qinghai Lake. The Koko Nor area is a green oasis in the barren highland protected by high mountains. The "Aza" people defended their country against the Chinese around 600 AC. They were tough warriors. In the wars between Tibetans and Chinese about 700 AC, they were allied with the Tibetans. In 800 - 900AC they made raids into the Chinese controlled Dun Huang area. They abducted children and young people as slaves; just as the Scandinavian "As", the Vikings, did in Europe on the same time. Later they disappeared from the history.

There is very little information about their culture, their habits, how they looked like or their language. But it seems to me, that the name "As" suggests they were Indo-Europeans. ("Life Along the Silk Road" page 61-62), (see Chapter 12. "A Dan-gaard in Gansu and Qinghai")

The Danish Viking king, Harald Blï¿½tand (Harold Bluetooth), had an elder brother named Knud Dana-ast. His surname means, he was a Dane of As descent. He never became king, because as a young man he was killed during a Viking raid in Ireland. His name explains the relationship between our two ancestral names, "As", and the "Danes". We are "Dan" of "As" descent.

In Lithuanian male names are added an "-as" in the end to indicate, that this is a man, for example in "Antanas". Lithuanian is widely considered to be the language most close to an original Indo-European language. In Scandinavian languages, the tradition is more to put the "As-" in front of the name, like in As-bjï¿½rn, As-ger or As-lak. 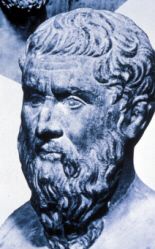 The ancient Greek historian, Herodotus of Halicarnassus, about 500 BC.

As mentioned above, before the Turks arrived at this part of the world, the Asia Minor was inhabited by Phrygians, Mysians, Lydians, Ionian Greeks and many more. They were all Indo-Europeans. Herodotus gives us some of their names. It is noteworthy that many of those end with "-as" or "-es".

Herodotus also lists some of the names of the kings of the Medes. The names are Astyag-es son of Cyaxars-es, son of Phraort-es and grandson of Deioc-es.

The names of the Persian kings were Cyr-us, son of Cambys-es and of course Darei-us.

Herodotus mentions, that a Scythian army was under the command of king Mady-as, son of King Protothy-es. 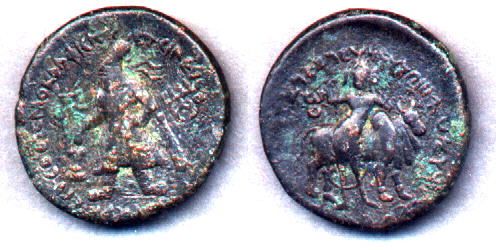 Kushan coin with a picture of king Vima Kadpises

Some of the Kushan kings' names also had this characteristic suffix, such as King Kujala Kadpis-es. Kushan Empire existed in the current Pakistan and Afghanistan to about 300 AC. The descended from the Yuezhi people, who originated from, what now is the Chinese Gansu province. It is assumed that they spoke the Indo-European language, Tocharian.

In modern Danish, we still use the word "os" about ourselves. It is the same word as "as". Basically, it means the same as the Eskimo word about themselves "Inuit". It means "we, the humans".

Also think about a typical English upper classes pronunciation of the word "us".

It is very likely, that the word "us", "as", "us" or "-es" originates far back in history. All the numerous Indo European people brought it along when they migrated from the original Indo European homeland far back in the Stone Age.

However, it should be mentioned that there is also another explanation for the meaning of the word "as".

The Indian writer Thakur Deshraj wrote in 1934 a book on Jat History, "Jat Itihas", in Hindi. "The word "Asiagh" originates from the Sanskrit word "Asi", which means sword," he wrote. "According to" Kautilya "(?) Were the people who lived of "Asi", known as "Asiagh". "Those who settled in "Jangladesh" was called "Asiagh", and those who went to Scandinavia became known as "Asi".