Throughout the history of Europe, the dominant powers always have been kept in check by coalitions of smaller powers.

The Turks were defeated in the Battle of Lepanto by a coalition of Spain, Italian city-states, the Vatican, the Duchy of Savoy and the Knights of Saint John in 1571. The Habsburg domination in Europe was stopped in the Thirty Years' War, 1618-48, of the Protestant monarchs of Denmark and Sweden and a France led by Cardinal Richelieu. In 1683 the Turks were again defeated by an alliance of Polish, Austrian and German forces in the Battle at Vienna. Napoleon led his Waterloo in 1815 against a coalition of British, Russian and Prussian forces. 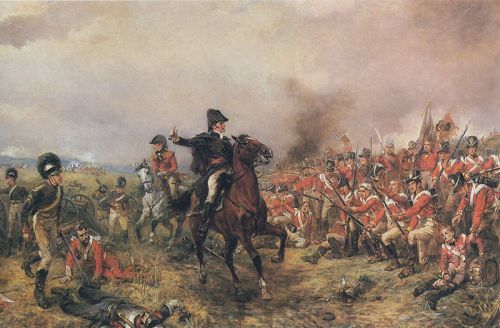 Wellington on the battlefield of Waterloo - painting by Hilligford.

That is precisely why Europe, in contrast to the empire of China, is still composed of a number of independent nations.

Winston Churchill and Lloyd George were proponents of establishing such a coalition of smaller powers, which could put Hitler's Germany checkmate, and thus prevent a war. A war that it otherwise would be very difficult for the Western Powers to win alone.

This could only be achieved by creating an alliance with the Soviet Union.

Taylor says: "The promptings did not come only from France. The need for a Soviet alliance was obvious for every competent British observer, immediately the guarantee was given to Poland, Churchill made the point in the House of Commons on 3 April:"

"To stop here with a guarantee to Poland would be to halt in no man's land under fire of both trench lines and without the shelter of either - Having begun to create a grand alliance against aggression, we cannot afford to fail. We shall be in mortal danger if we fail - the worst folly, which no one proposes we should commit, would be to chill and drive away any natural co-operation, which Soviet Russia in her own deep interests feels it necessary to afford."

Lloyd George spoke even more strongly: "If we are going in without the help of Russia, we are walking into a trap. It is the only country, whose arms can get there - If Russia had not been brought into this matter because of certain feelings the Poles have that they do not want the Russians there, it is for us to declare the conditions, and unless the Poles are prepared to accept the only conditions with which we can successfully help them, the responsibility must be theirs." (Taylor p 276-277)

Such a foreign policy are characterized by that the nation is fighting the evil and supporting the good.

The U.S. President John F. Kennedy expressed in a speech in 1961 the essence of "Foreign policy based on moral values". He said that the United States would "pay any price, bear any burden, endure any difficulty, support any friend, confront any foe to ensure the success and survival of freedom." 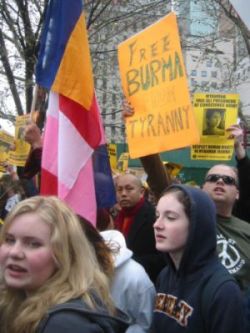 Ordinary voters are not aware of the prerequisites for foreign policy. They are busy with their daily life and work and know nothing of intelligence reports, the ambassadors' reports or the military strength of foreign nations. They are not trained to analyze an economic or military situation, and they have in general poor knowledge of history. They know basically only their own moral attitudes, namely what they impulsively think is right or wrong, and based on these they will take their decisions.

Therefore, foreign policy in democracies tends to be guided by moral values.

The modern socialists' great interest in foreign policy arises out of moral attitudes like solidarity with developing countries, universal respect for human rights, democracy and tolerance towards other races and religions. The question of the security of their own nation, they seem to find less important.

A. J. P Taylor believed that especially the British policy on Germany in the interwar period was more dictated by moral views than it was governed by real policy.

A nation cheering pragmatic policy seeks alliances with his enemies enemy. Nothing is sacred, apart from the nation's freedom and survival.

The pragmatic policy point of view is often expressed by the Jesuit saying: "The end justifies the means".

The book "The Prince" by Nicolo Machiavelli is often perceived as a handbook in pragmatic policy.

The ancient historian Thucydides wrote "The Peloponnesian War" about the war between Sparta and Athens. He is assumed to have believed that Athens lost the war because it was a democracy. Voters are too easily stirred up to unwise actions. Many think that Thucydides' book is an illustrative lesson-book in pragmatic policy. 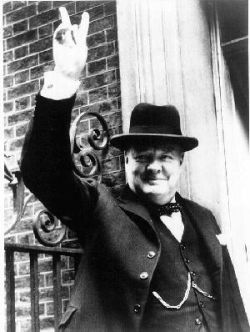 Winston Churchill and Lloyd George could their history, and they knew that it was now or never. Germany grew larger and stronger day by day. Sooner or later it would turn against West. For them, it was not a question of moral and human rights principles. For them, it was about England's freedom and dominant role in the world.

In a speech the 27. of May Churchill declared: "If her Majesty's government, having neglected our defense, after having thrown Czecho-Slovakia away with all that Czecho-Slovakia implies in terms of military power, after having committed ourselves to defend Poland and Romania, now refuses and throws Russia's indispensable help away and thus in the worst way leads us into the worst war, it will hardly deserve the generosity, which it had received by its countrymen."

Pragmatic political measures can strike back. As they did, when the USA supported it's enemy's enemy, Obama Bin Laden, and his Jihad fighters in Afganistan.

4. Negotiations with the Soviet Union

Pressed by the opposition the British government's led half-hearted negotiations with the Soviet Union; maybe they wanted in this way to put pressure on Germany to ensure an advantageous Anglo-German agreement. They were unable, or not willing to tackle the problem that Poland and Romania would not allow Russian troops on their territory. This led the talks in deadlock. 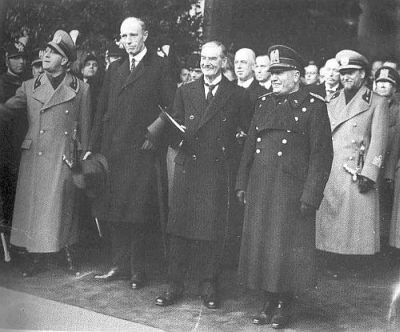 Halifax and Chamberlain visiting Mussolini and his foreign minister and son in law, Ciano.

Taylor continues: On 29 July David Lloyd George joined behind Churchill's appeal with these words: "Mr. Chamberlain negotiated directly with Hitler. He went to Germany to talk to him. He and Lord Halifax paid a visit to Rome. They went to Rome, drank Mussolini's toast and told him what a nice guy he was. But whom did they send to Russia? They have not even sent an ordinary minister. No, they sent a clerk from foreign office.- It is an insult .- They have no sense of proportion or any understanding of the seriousness of the situation when the world is standing on the brink of an abyss."

"The British were warned again and again that Soviet Russia and Germany might reach some agreement; or, at the very least, that Soviet Russia might sit back, while the rest of Europe ran into trouble. They were warned by Seeds, their ambassador in Moscow; they were warned by Daladier; they were even warned indirectly by Goering, who disliked the prospective pro-Soviet line of German policy. Chamberlain, Halifax and the foreign office remained incorrigible. The warnings were dismissed time and again as "inherently improbable". Did the British not see that, with the Anglo-Polish alliance, they were already pledged to fight in defence of Soviet Russia's frontiers? How then could they suppose that Soviet aid was anything other than an uncovenanted benefit?" Taylor wrote.

Left: David Lloyd George and Adolf Hitler.
Right: Molotov signing the Nazi-Soviet Pact - to his right Stalin and next Ribbentrop.

"It is impossible to discover a rational answer to these questions. If British diplomacy seriously aspired to an alliance with Soviet Russia in 1939, then the negotiations towards this end were the most incompetent transactions since Lord North lost the American colonies. Perhaps incompetence is the simple explanation. The British were overwhelmed by the difficulties of their position - devising a policy for a World Power, which wanted to turn its back to Europe and yet had to take the lead in European affairs. They distributed guarantees in eastern Europe and aspired to build up military alliances. Yet, what they wanted in Europe was peace and peaceful revision at the expence of the states, which they had guaranteed. They distrusted both Hitler and Stalin; yet strove for peace with the one and alliance with the other. It is not surprising that they failed in both aims." (Taylor p. 280)

Lloyd George said the 19 May "For months we have been staring this powerful gift horse in the mouth - why do we not make up our mind, and make it up without any loss of time, that we should come to the same terms with Russia, as we do with France". Such arguments, though cogent, carried little weight with Chamberlain and the Conservative back-benchers. (Taylor p. 289)

"In August the Russians were not thinking in terms of war. They assumed, like Hitler, that the Western Powers would not fight without a Soviet Alliance. Poland would be compelled to yield; and, with the Polish obstacle out of the way, defensive alliance with the west might be achieved on more equal terms." (Taylor p. 318)