12.Place-names in Asia and Scandinavia

The ending term -gaard is the clearest place-name testimony to an Indo-European influence in Central Asia. In Scandinavia it is found in the Edda and sagas as Asgaard, Udgaard and Midgaard. Constantinople was called Miklagaard, and Russia was called Holmgaard. Adam of Bremen from around the year 1070 AD tells: "Russia is called by the barbaric Danes for ÃstergÃ¥rd (Eastgard), because it is located in the east, and has like a watery garden an abundance of all good. It is also called HunnegÃ¥rd, because the Huns there had their first seat.

It can also be recognized in the Chinese own name for China, Zhong Guo, which means the Kingdom in the Middle or Midgaard and is pronounced somewhat like Djung Gjaar, which last term clearly represents the Indo-European gaard. Which shows that Chinese language has been influenced by Indo-European sometime in the past.

The Indo-European word "gaard" can be found in almost all Indo-European languages with similar meanings. In modern Scandinavian, this means a farm or a bounded and enclosed area, for example bounded by walls or buildings.

Modern Chinese names for nations, expressed with alphabet, use also the ending "-guo", which is pronounced somewhat like "gjaar" for exampel in "Fa-guo" (France), "Doe-guo" (Germany), "Mei-guo" (USA) and so on.

Left: Yuezhi burn graves near Hami - Yuezhi burned their deads. Right: Typical landscape in Gansu - Yuezhi raised horses, it would not be very easy today, it is too dry. The modern landscape seems to be better suited for raising of camels.

Many salty lakes in central Asia are called something with "nor", like for example, Koko Nor, Orku Nor, Ebi Nor, Ubsa Nor, Ayar Nor, Ulungur Nor, Durga Nor, Kara Nor and the now-vanished Lop Nor. 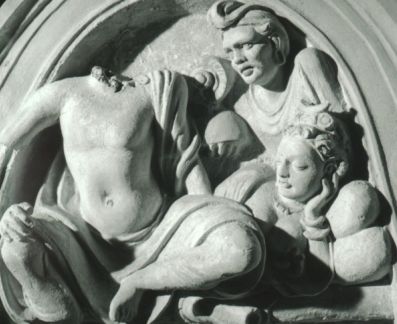 A group from the Kushan excavation site Hadda at the Khyber pass near Jalabad in Afganistan. Kushans were descendants of the Yuezhi, so it is likely that this is how Yuezhi looked like. It also seems as if he has been lucky enough to get a Chinese princess.

Quite similar place name endings are used in Scandinavia for shallow lagoons with brackish water; like for example Kertinge Nor, Korsoer Nor, Stege Nor, Hedeby Nor, Vindeby Nor and so on. Flemming Rickfors has identified more than thirty "nor" in Denmark and Norway. 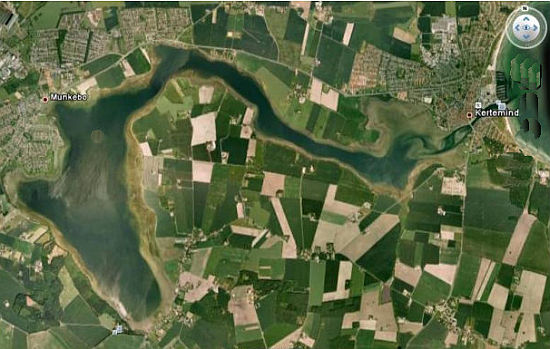 This must mean that the Aesirs, as Snorre reported, came to Scandinavia from Central Asia, where they called shallow salt lakes for Nor. In their new home in Scandinavia, therefore, they found it natural to call shallow lakes with brackish water for Nor.

Another striking thing about place names in Qinghai and the surrounding areas is that many cities and places are called something with "ning", for example Xining or Ning Xia; as do countless villages in Denmark, such as Revninge, Kertinge, Refsvindinge and Mesinge.

That makes it likely that the old Danish "ning" means person or people. It can be found in hedning (pagan), Faering (person from Faroe Island), Islaend-ing (person from Iceland), flygt-ning (refugee) and slaegt-ning (relative) and many other connections where it clearly means "person". The village of Kertinge near Kerteminde, "Kert-ninge", will thus mean the "Kert people", that is, the people associated with the water-body "Kert".

Left: The salty lake Koko Nor seen from space. Communist China has discarded the lake's ancient name and given it the more prosaic name Qinghai Lake.
Right: View of the salt lake Koko Nor in Qinghai.

Similarly, one can imagine that, for example, the names Mesinge and Revninge came into being. There were already some natural formations called "Mes" and "Reef", lakes or streams or the like. The people who lived there before had given them these names.

When the Aesirs came to these places it became Mes-ninge "and" Rev-ninge ", which means the people who live at "Mes" and "Rev". Or ancient local kings were named something like "Mes" and "Rev", and the names Mesinge and Revninge tell that the inhabitants were descendants of these.

It may be objected that "ning" does not mean person, but is a derivation or inflectional form something like the English "ing" form. But if you think about it more closely, the English meaning is in fact a bit like the meaning "person". For example, "James is running" tells that James is identical to a running person.

In Chinese one address each other in general with "ni", just as in Swedish, but in North China and especially in Beijing one might address superiors and older people with the more respectful "ning". This supports that -ning originally meant person or persons and since it exists in both Europe and Asia, the term must have its origin in an Indo-European language.