6. Similarities Between Danish and Chinese Language

It's called "mama" and "papa" both in China and Europe. It is a Chinese family costom to say it twice, so originally it was probably "ma" and "pa".

The Danish word for father, "far", is very close to the Chinese "bar".

In old Danish, the word "mar" meant "horse". Hence comes the term "nightmare", "mare-ride" in Danish. The village Martofte on the northern part of Funen is named after an enclosed fenced area, where there were horses. In Chinese "horse" is also called "ma". 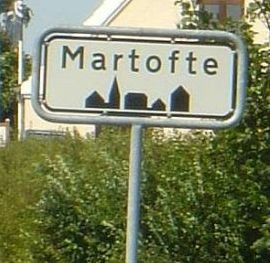 "Jo", is a typical Danish affirmative word, which also has its match in the Chinese, "you" which is pronounced somewhat like "jo-oh". It means "yes - there is", just as in Danish.

There are also grammatical similarities between Danish - an old Indo-European language - and Chinese.

In Danish we have a very convenient grammatical negation. We just need to put the "u-" before a word, and then the meaning of the word will be changed to its contrary. Just think about the words "u-hyggelig" (horrifying), "u-afbrudt" (uninterrupted), "u-afgjort" (undecided), "u-artig" (misbehaved), only to mention a few examples. It is also available in other Indo-European languages such as English and German, where you put un- in front

The Chinese language has a very similar negation. They just put "bu-" in front of a word, and thus the meaning becomes the opposite.

For example, "good" in Chinese is called "hao", and bad is "bu-hao"; beautiful is "piao-liang" and ugly is "bu-piao-liang; "yes" is "shi-de" and "no" is "bu-shi" or simply "bu" , which are used in Danish as an scaring expression, ghosts are expected to say "buh".

The numbers can also be made into the adjective-like ordinal numbers by adding "-de" or similar. Like it is the case in "fjer-de" (fourth), "syven-de" (seventh), nien-de (ninth) and so on.

Danish has different ways to make verbs noun-like. Among others, we can add "-se".

The basic Chinese character for son

The noun-like ending "-se" can be found in Chinese also, where it serves to highlight the noun-like characteristic; for example in "child", "hai-zi", in "cup", "bei-zi", in "wheat", "mai-zi", in "prince","wang-zi". The Chinese characters for "zi" is the fundamental character of "son", which expresses that the word or term is derived from something else like the son is derived from the father.

There are also similarities between individual words. The meaning can be slightly different as we often see, when similar words are found in different languages.

The Chinese word for a musical note is "lu"which is pronounced similar to "ly", It is very close to Danish word for sound, "lyd", or "ly'", as we say in the accent of the island of Funen.

Making a sound is called "shen ying" in Chinese, which is pronounced somewhat in the direction of "shyng jing", and it is very close to the Danish word for "sing", synge, and the meaning is also very close.

Therefore, another reason, why we can find words and linguistic phrases that are similar in relation to Danish and Chinese, is probably that Danish, other Northern European languages and Chinese far back in history have been influenced from the same source.

The Aesirs or Asians were reasonably linguistically related to other Indo-European peoples, who remained on the eastern steppe. And these people became part of the great Chinese linguistic melting pot and made their contribution to the Chinese language.

China experienced repeated invasions from the Eurasian Steppe - also at the beginning of the first millennium. It is perfectly reasonable to assume that the conquerors also here made their mark in the local language.

The net result of the Mongol conquests in the 1200's was a Turkish and Muslim Central Asia, which effectively separated China from Europe. Then East and West evolved separately, and this is the source of the notion of modern Chinese historians - that "China is an island," so to be understood that Chinese culture and civilization have developed completely independently of the rest of the world, especially Europe.