Throughout Cretaceous "Denmark" was covered by the shallow tropical Tethys Sea.

The dinosaurs have never set their feet on Danish soil, because the part of earth's crust, which later would become Denmark, was by then washed by a shallow tropical ocean called Tethys Sea.

The whole period of the dinosaurs is named the Mesozoic and is often called Earth's Middle Ages. It includes the periods of Triassic, Jurassic and Cretaceous.

In Cretaceous, the continents had almost reached their current positions, and the seas at the poles began shortly to freeze. At the beginning of the period, there could be occurrence of snow at higher latitudes. But as the water had not yet been tied up in today's large ice sheets, sea levels were still very high; it could be somewhere between 40 and 250 m. higher than today.

Deep in the underground Denmark is built on a foundation of chalk, which extends from the Baltic Sea east of Zealand and under the North Sea to England. Only in some places, such as on Møns Klint on Zealand and Dover in England, the white chalk comes to light.

Left: A thick layer of chalk in the underground is stretching from the Baltic Sea to the English Channel, but only on Møns Klint, Dover and a few other locations it comes to the surface.
Right: Møns Klint.

In the Tethys Sea lived myriads of microscopic algae. They had a shell of chalk. When they died, the shells sank to the bottom, and through many millions of years, they deposited as a thick layer of chalk on the bottom of the ocean. Since all the shells were extremely small, the chalk is also very fine-grained - Easy to write with.

The chalk deposition first started in the mid-Cretaceous but continued well into the following tertiary period.

Fossils from the Cretaceous period - left, belemnites, which was a now extinct relative to squids.
Right, a petrified sea urchin - Photo Henning Soeder.

In this warm sea also lived a variety of octopus, sea urchins, clams, sharks, oysters, starfish and fish. The 15 m. long mosasaur killer-lizard, a swimming dinosaur, lived there too.

In the mild climate of the Cretaceous-era emerged flowering plants, and the first grass species sprouted. Among the animals on land dinosaurs were dominant. 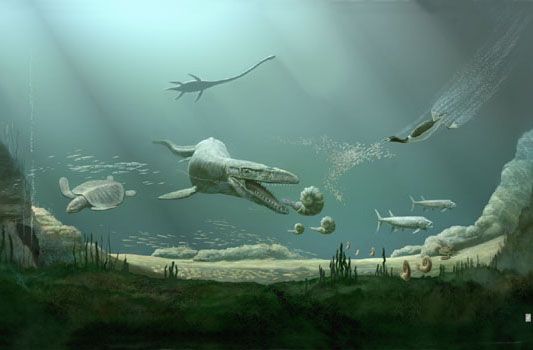 In the Tethys Sea lived squid, fish and sharks, and the 15 m long swimming killer-dinosaur, Mosasaur.

The high temperature of the period was with some probability supported by a high content of water vapor in the atmosphere.

By counting the number of slits on the underside of fossil leaves has been concluded that the CO2 concentration in the Cretaceous atmosphere was 4-5, and sometimes up to 7 times as big as it is today.

All Earth's dinosaur species became extinct at the same time 65 million years ago.

Many researchers believe that the cause of the giants' extinction was that Earth was hit by a very large comet or asteroid with a diameter of about 6-15 kilometers. A big crater on the Yucatan Peninsula in Central America can be dated to 65 million years ago, and it is believed to be the place of impact. 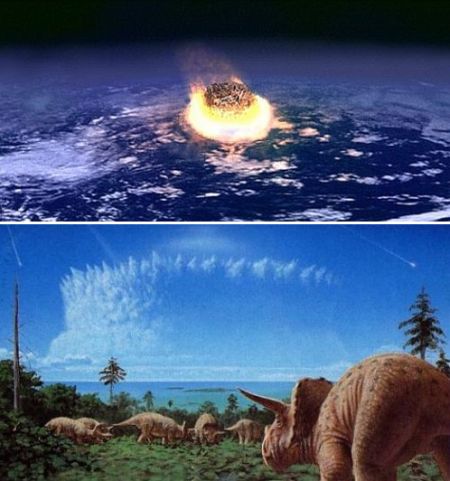 Many believe that the cause of the dinosaurs' extinction was that Earth was hit by a huge meteor, producing a "nuclear winter".

The impact threw up huge amounts of dust that acting together with smoke from extensive fires and perhaps volcanic activity rose up in the atmosphere and troposphere. At 10 - 15 kilometers above the Earth's surface the particles were heated by the sun thus gaining the energy to float up into the stratosphere, where they could not be washed out by rain. Here the particles remained for several years blocking the sun's rays thereby producing many years of "nuclear winter".

This dramatic and long-lasting temperature drop wiped out the dinosaurs, one of the most successful species that ever existed on planet Earth. Many and varied species of dinosaurs emerged and disappeared over a period of 165 million years since the Triassic period 230 million years ago, on through the following Jurassic and Cretaceous periods, until their final exit approximately 65 million years ago.

Some scientists believe, however, that dinosaurs are not completely extinct. Birds can have evolved from dinosaurs. They support their theory by the facts that both dinosaurs and birds have three toes on the feet, they have air-filled bones, and they have the typical "wishbone" bone in common, additionally, it has been demonstrated that some dinosaurs had feathers.

The Dinosaurs' exit marked the end of the Cretaceous era.