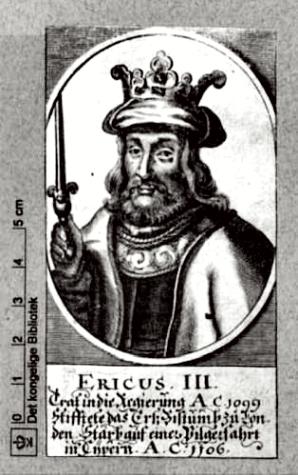 Engraving depicting Erik Ejegod made in the period 1500-1795. It has probably no portrait-likeness. From The Royal Library.

Erik Ejegod was the fourth of Sweyn Estridsen's sons to be elected king of Denmark. Posterity has given him the byname Ejegod, Egode or just the Good, probably because all his years of government were blessed with a good harvest, prosperity and good times. Saxo says he got his epithet "not only for his virtues but also because of the good times". The epithet can also be due to the fact that all sources - except Roskilde Chronicle - agree that he was a good king.

When his elder brother Oluf Hunger died in 1095, 19 years had passed since their father, Sweyn Estridson, passed away in 1076 after 27 years of reign, and few of his many sons were still alive. "According to the laws, Erik then assumed the government of Denmark after his brother Olaf, for he was the eldest of King Sweyn's sons, who then lived," Knytlinge Saga tells.

Like those of the brothers who had been kings before him, he ruled not very long, namely eight years from 1095 to 1103.

Royal families or dynasties through Denmark's history - except for Magnus the Good - all kings descend from "Hardegon, the son of a certain Sven", who conquered at least part of Denmark around the year of 917. It gives a good overview to divide the list of kings and thereby Denmark's history into manageable groups.
The Knytlings got their name from their ancestor, Hardecnut, son of Hardegon. He is called Knud 1. and was in all probability Gorm the Old's father. Magnus the Good was the son of the Norwegian Saint King Olav the Holy; His reign forms a transitional period to the reign of Sweyn Estridson and his sons and grandsons. Sweyn Estridson was the grandson of Sweyn Forkbeard.
The rivaling kings, Svend, Knud and Valdemar all descended from Sveyn Estridson; their period appears as an interregnum to the Valdemar era.
Many historians, probably most, only consider the Valdemar 1. the Great, his son Knud 6. and Valdemar 2. Victory the Valdemars. But one can not have a patent on such definition, and it seems the author natural and appropriate to include their direct male descendants - including Erik 4. Plovpenning, Abel and Christoffer 1. - until Christoffer 2. which was the last king before the period without king
Valdemar 4. Atterdag was not a Union King, but it was his grandson Oluf, and his daughter Margrete 1. became ruling queen of the Scandinavian Union. One can say - with a little good will - that Valdemar Atterdag restored Denmark and thus created the foundation for the Kalmar Union with Norway and Sweden.
The early Oldenburger kings were also Union kings, but only for short periods.
The Civil War The Count's Feud was an important turning point in Denmark's history. As a consequence of the Lutheran Reformation, the kings took over the third of Denmark's arable land, which had belonged to the church. This wealth made it possible to push the old nobility aside and establish the absolute monarchy, which was an important cause of Denmark's historical decline. In 1848, a democratic constitution was introduced without acts of violence.
With the childless Frederik 7, the Oldenburg royal line died out in 1863. The throne was then given to Christian 9. of Glucksborg.

King Erik's greatest achievements were that he got his brother, Canute the Holy, canonized as a Catholic saint, and he managed to get the Pope's permission to establish a Nordic archbishopric in Lund, thereby detaching the Danish church from the Hamburg-Bremen archdiocese. Asser, whom Olaf had appointed bishop in Lund, became the first archbishop of the Nordic countries. 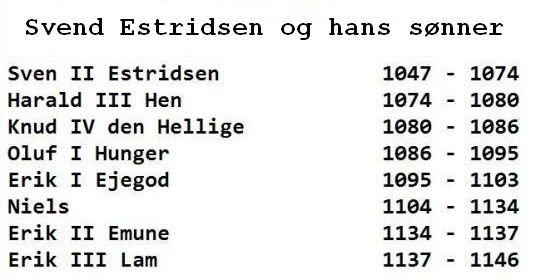 Sweyn Estridson was succeeded by five of his sons and then a grandson and a son of Erik Ejegod's daughter.

Through his son Knud, who got the epithet Lavard, he became the ancestor of all later Danish kings, which undoubtedly contributed to his fame.

In 1798, the historian and book collector Peter Frederik Suhm wondered why Erik Ejegod called himself Erik 3. We send a thought to "Vita Anskarii", which tells: "While Ansgar stayed in Sweden, the prospects of a successful missionary work in Denmark vanished. Erik, King of Jutland, who had previously supported Anskar, had become unpopular with his pagan subjects, and in a fight, that lasted for three days, he and almost all his leading men were killed, and his only descendant, Erik 2. was left as ruler of only a small part of Jutland." Many other informations indicate that the Danish royal family really descends from Jutes' kings and ruled over a small part of the peninsula, Jutland, in the early Viking period. Erik Ejegod may well have considered these kings as his ancestors.

Erik Ejegod was born in Slangerup in North Sjælland between Fredrikssund and Hiller&#248d. Saxo says that during his visit to Constantinople, the emperor gave him a splinter of Christ's Cross and some of the sacred Nikolaus' bones that he sent home to his native city: "He accepted this sacred gift with great pleasure and sent it under the Emperor's seal to Lund and Roskilde, and in order to that his birthplace also should have a sanctuary to show, he sent a piece of Christ's Cross and Holy Niels' bones to Slangerup, for the church there he is said to have built, and where the altar stands, he is supposed to have seen the daylight. 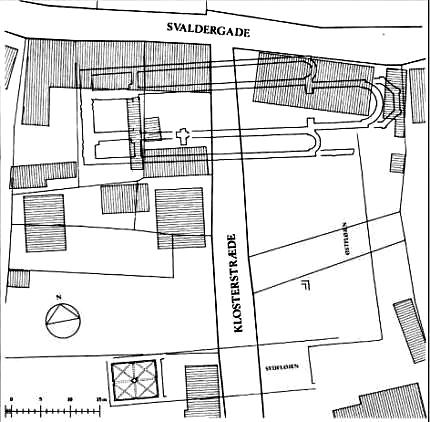