For 700 years, Christoffer 2 has been the historian's favorite prügelknabe. He was the irresponsible king that was the reason why Denmark was close to disintegrating and disappearing into the myriad of German principalities in the 1330's. 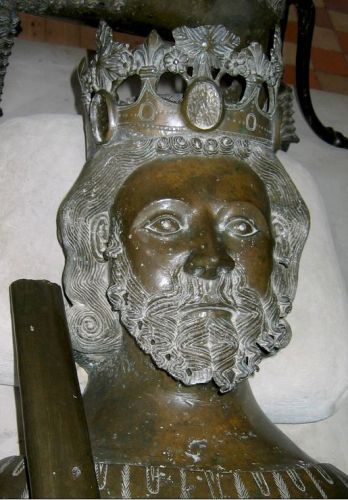 Portrait of Christoffer 2. in detail of his tombstone in Sorø Church. There must be portrait likeness, as the bronze statue was created quite a few years after his death. Photo Mariusz Pazdziora Wikipedia.

But in reality, he had taken on an impossible task. From the first day of his reign he was handicapped, having to personally take over a huge debt from his brother, Erik Menved.

King Erik had pursued a very ambitious and aggressive foreign policy in both Sweden and Northern Germany. In this connection he had used mercenaries on a large scale. He financed them with borrowed funds so that in return for the money he gave the creditors the so-called pawn fiefs, which means that each creditor was given a part of Denmark - for example Fyn or Scania - and was given the right to collect all the taxes, fines and fees, which the king was otherwise entitled to collect in these parts of the country until the loan was redeemed. 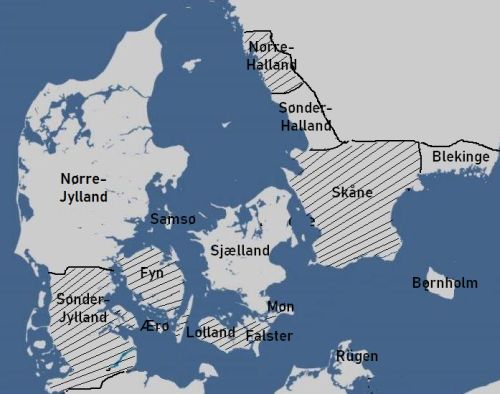 Parts of Denmark that were not available to Christoffer 2 at his accession to the throne in 1320, Scania and the islands of Fyn, ærø, Lolland, Falster, Møn, and Samsø were pawn fiefs. South-Jutland and North-Halland were in practice independent duchies outside the king's influence. In addition, much estates of the crown, scattered throughout the country, was also reserved as security for debt. Photo Bent Hansen.

At the same time as Christoffer personally had to take over all this enormous debt as a precondition of being elected as a king, he had to sign a hand-binding contract, which forbade him to impose new taxes, yes even reduced the royal revenue in the areas which at this time was still not pawn fiefs - and thereby in practice made it impossible for him to redeem the many and large pawn fiefs.

Denmark's history divided into Royal Dynasties. However, all the kings - except Magnus the Good - descend from "Hardegon, son of a certain Sven", who conquered a large part of Jutland around 917 as told by Adam of Bremen in his section on Bishop Hoger. The line of kings and times of war and peace are the backbone of history - not that stories about culture and ordinary people's living conditions are not important and interesting - but without the line of kings, history can easily become a kind of relatively unstructured conversation about aspects of Danish history that pedagogically are not easely fixed time. It improves overview to divide the royal line - and thus Danish history - into manageable sections.
The Knytlinge dynasty got its name from a Hardecnudth, most likely son of Sven. He is also called Knud 1. and was with great certainty the father of Gorm the Old, as narrated by Adam of Bremen under Bishop Unni.
Magnus the Good, who became king in 1047, was the son of the saint king Olav of Norway; his reign forms a period of transition to the time of Svend Estridsen and his sons and grandsons.
The rival kings, Svend, Knud and Valdemar, from 1146 to 1157, all descended from Sweyn Estridsson; their time makes up an interregnum to the time of the Valdemars.
Many historians, probably most, only count Valdemar the Great and his sons, Knud the Sixth and Valdemar the Victorious to the Valdemars. But no one can patent such a definition, and it seems to the author advantageous also to include their less successful descendants - who are Erik Ploughpenning, Abel, Christoffer 1, Erik Klipping, Erik Menved and Christoffer 2. who was the last king before the kingless time from 1340.
Valdemar Atterdag was not king of the Kalmar Union, but his grandson, Olaf, was, and his daughter, Margrete 1. became queen of the Scandinavian Union. One can say - with a little good will - that Valdemar Atterdag recreated Denmark and thus the possibility of the Kalmar Union with Norway and Sweden.
The first Oldenburg kings were only Union kings for short periods.
The Civil War, the Count's Feud, in 1534-36 was a landmark turning point in Denmark's history. As a consequence of the Lutheran Reformation, which took place at the same time, the kings were able to confiscate the third of Denmark's agricultural land that belonged to the church. This fabulous wealth made it possible for them to subdue Denmark's old nobility and after some time to establish the autocracy, which became one of the most important causes for Denmark's continued historical decline.
In 1848, a democratic constitution was implemented without civil war or other violent events.
The Oldenburg royal family died out in 1863 with the childless Frederik 7. After that, Christian 9. of Gl&#252cksborg was appointed king.

Some Danish nobles allied in 1325 with the Holsten counts and started a revolt against their king, which quickly spread to the whole country. King Christoffer, Queen Eufemia and their youngest son, Valdemar, had to flee to Northern Germany. 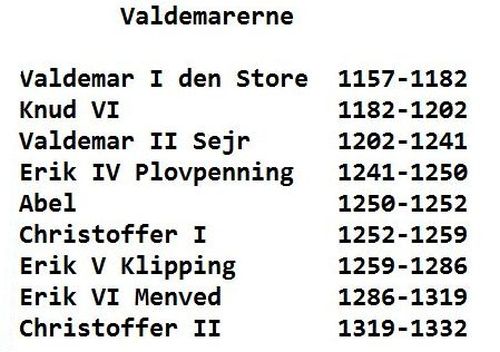 The Valdemars. It is customary only to attribute Valdemar the Great, Canute the Sixth and Valdemar the Victorious to the Valdemars. But thereby their less successful descendants become pedagogically homeless, even though they are true descendants after the first and more famous Valdemars, and they are not separated from these by any natural interregnum. Therefore, I would suggest that the whole group from Valdemar the Great to the kingless time to be called the Valdemars.
Erik Ploughpenning, Abel and Christoffer were sons of Valdemar the Victorious and they succeeded each other as kings. Abel killed his brother, Erik, and had his body immersed in the fjord, Slien. However, 24 knights swore he was innocent, and therefore he was elected king anyway. However, only a short time later, he was killed in battle during a campaign against the Frisians, and then his younger brother, Christoffer, was chosen as his successor, and the deceased Abel's eldest son was thereby bypassed. In the following decades, this led to a long-standing rivalry between the descendants of Abel and Christoffer, respectively, and that contributed to the historical division of the original Denmark into the kingdom and the duchies.
Christoffer's son, Erik, who was later bynamed Klipping, only 11 years old became king with his dynamic mother, Margrete Sambiria, as a guardian. The great men limited his power with a hand-binding contract at Nyborg Castle, which among other things decided that the meeting of the king and great men, which was later called the Danehof, should be the country's highest court. In addition, it was ruled that the king's court could only deal with cases that had previously been presented to another court, and that it could only impose standard fines. Erik Klipping was killed in Finderup Lade near Viborg with 56 fatal wounds and this murder is still one of the great mysteries in Danish history. His son, Erik Menved, tried to make increased influence in northern Germany by holding some magnificent - but certainly expensive - knight tournaments. He was succeeded by his brother, Christoffer 2., who had to take over his large debts, while at the same time the possibilities of increasing the royal revenue by increased taxes were blocked by a hand-binding contract. When he died in 1332, no new Danish king was elected, and for a period the country was thus without a king.

In 1329, the creditors divided the provinces of Denmark among themselves, which triggered a new revolt based in Jutland. Supported by another of Denmark's great creditors, Johann the Mild of Holsten-Plön, the rebels called Christoffer home and recognized him again as king - but with extremely limited means to exercise royal authority.

Perhaps in 1330 there was a war between Denmark's two largest creditors, namely Count Gerhard and Count Johan den Mild. Christoffer took Johan's side, but in the battle of Kropp Hede a little north of Danevirke in 1331 Gerhard won.

The rest of his reign - and his life - Christoffer spent in rather scarce economic circumstances considering he was king. He died in 1332 in his modest home on the island of Lolland.

Christoffer had many good qualities, which under more favorable circumstances could have made him a good king. 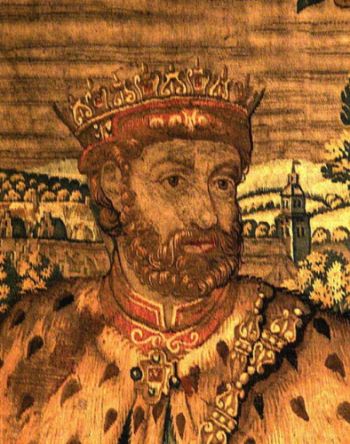 Christoffer 2. of Denmark, detail from tapestry at Kronborg Castle. The wall tapestry at Kronborg were made in Helsingør in 1584, almost 300 years after Christoffer's lifetime. They have not known him, but it is clear that the weavers have worked with his grave monument in Sorø as a template. It probably looks pretty good like him. Foto: Orf3us Wikipedia.

He was, according to all that is said, 100% committed to his task as king, and thereby he probably differed from his father, Erik Klipping.

He was not afraid to address the issues and make decisions. They could turn out to be wrong, but that's the case with management decisions under uncertainty. One should be happy if most turn out to be reasonably right.

But Christoffer never really became popular. The Danes may have had positive expectations of him in connection with his accession to the throne in 1320. The simultaneous hand-binding contract - although it was very unrealistic - reveals a mood of new beginning after Erik Menved's heavy taxes and foreign adventures. One may have imagined that now everything was getting better, the exiles could return to their fathers' homes, and they had chosen a completely new king.

But the enormous debt that Erik Menved had created could not be removed by majority decisions. It had now been laid on the shoulders of Christoffer, and he had to do something - which did not harmonize with the unrealistic hand-binding contract - in order to generate sufficient income for the crown. 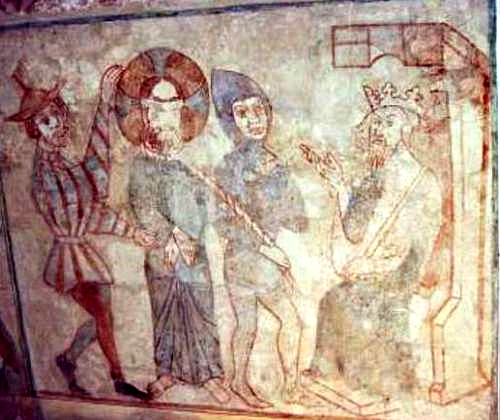 Fresco from around 1390 in Tirsted Church, showing Jesus, which is presented for King Herodes. Photo kalkmalerier.dk.

This may have created the disappointed expectations expressed in a the contemporary Danish Chronicle: "He practiced no justice, but rather ruled like a tyrant, truth was not in his mouth, and he was unbridled in every way, on the peasants he imposed harsh taxes, and the noblemen he ruthlessly imprisoned or chased out of the country."

One thing that must have especially contributed to the opposition to him was his longing for international fame, which his brother had also had - in fact very similar to modern politicians.

Historian Palle Lauring describes Erik Menved's knight gathering at Rostock in 1311 as a really very extravagant event that lasted four weeks with artificial fountains with red and white wine, plentiful tables with food that everyone could supply from and free oats for thousands of horses. The author thinks he has it from Arild Huitfelt, who wrote around 1600.