Valdemar Atterdag is one of Denmark's great kings, if not the greatest. With restless energy - with militay power and with cunning - he purposefully rebuilt the kingdom from non-existent to an important European power. 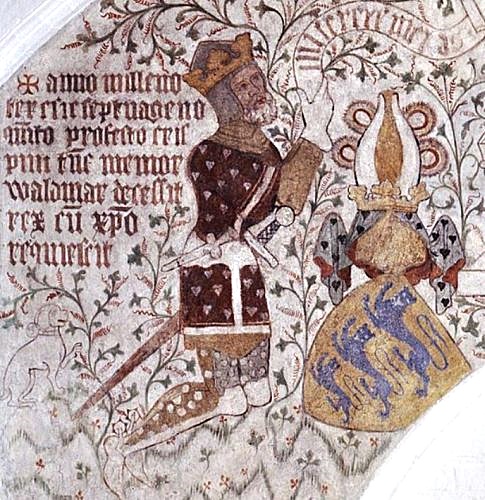 Valdemar Atterdag on fresco in St. Peders Church in Næstved, which is painted shortly after his death, which makes portrait likeness likely. Foto Wikipedia.

There seems to have been a tendency that those of Denmark's kings, who have not been appointed to royal dignity from childhood, had been the best kings.

Perhaps it is the case that boys and young men, who are not predestined to become something big, are more likely to acknowledge the emotionally cold and pedantic reality than boys, who are selected for greatness from birth.

Harald Bluetooth only became king because his big brother Knud fell in Ireland. The same Harald for a long time opposed his son, Sweyn, with the later byname Forkbeard. Canute the Great only became king of Denmark because his big brother Harald died early - and he had to experience a humiliating defeat before he became king of England. As the younger son of the murdered and disgraced, Ulf Jarl, it was not written over Sweyn Estridsen's cradle that he was to become a famous king. Erik Ejegod was so far down in the rank of the brothers that at his birth it must have seemed unlikely that he would become king. King Valdemar - bynamed the Great - son of a murdered duke and fatherless from birth, did not grow up with the certainty of becoming king. He became king because of his own qualities and the development of events during the Civil War.

The young junker Valdemar grew up at the imperial court in Brandenburg as a poor prince living at the expense of his relatives, the son of a hated, expelled and basically failed king. He had two older brothers, both of whom were closer to the barely existing Danish throne than himself. During his upbringing, there was very little that indicated that he would ever become king of the dissolved kingdom, which was called Denmark.