Last glacial absolute maximum took place about 26,500 to 19,000 years ago. The ice sheet covered then the whole of Scandinavia and the Baltic region down to North Poland and Germany. In North America, the ice cap extended down to the Great Lakes between Canada and the United States.

Cenozoic is the period of mammals, which followed the Mesozoic which was the period of the dinosaurs. Tertiary is that part of Cenozoic where no humans existed, and Quaternary represents the part of Cenozoic when there were humans. Quaternary is subdivided into Pleistocene and Holocene. Holocene represents the present which basically is a Pleistocene interglacial period. The climate in the last phases of the Pleistocene is the subject of this article.

Drill cores from the inland ice show that the temperature in the Antarctic began to increase about 17,000 years ago, causing sea surface level to rise. 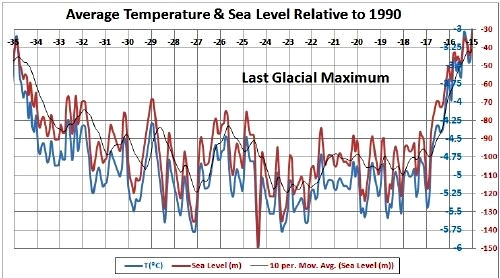 During the next close to 9,000 years the ice cap in Scandinavia dwindled slowly and became the smaller glaciers in the Norwegian mountains that we know today.

The warming happened quite irregular, Uriarte writes. In some periods the sea surface level of the World's oceans could rise 10 meters or more during a few hundred years. Such a sudden increase coincided with Bølling-Aller&#248d warm period about 14,000 years ago, when sea levels rose by 20 meters. Another warm period occurred 11,000 years ago at the start of the Holocene. Some have calculated that during warm periods sea surface level increased by up to 50 mm. per year, while it varied by only about 3 mm. per year in between warm periods.