On a wonderful summer day, June 5, 2019, young girls with flowing hair, dressed in light summer dresses flocked to the polling stations along with the other voters to vote for their dreams of a community based on goodness, tolerance, harmony with nature and resistance to the evil climate changes. 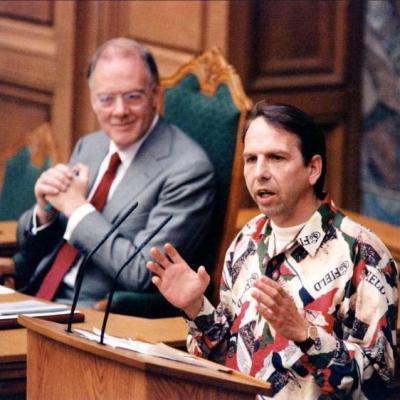 The Comedian Jacob Haugaard on the Parliamentary rostrum. Photo Asaga.

Never before political parties have run an election victory home on a program that promise good weather throughout the World. The only precedent is the comedian Jacob Haugaard's more modest election promise in 1994 on tailwind on the bicycle paths.

The Earth's climate is governed by the varying radiance of the Sun, the relative position of the Earth and planets, the cosmic radiation, varying cloud cover and the prevailing ocean currents. The politically correct parties won a landslide victory promising that they would reverse all this with some parliamentary decisions.

Never before has the youth been longer in school and universities. One cannot say that they are not educated; yet they as never before, thoughtlessly and irresponsibly, follow their dreams and impulsive feelings.

The persistent Islamic immigration due to the rules of family reunion and the resident Muslims' high fertility will with mathematical certainty make Denmark a Muslim area already in this century, if the Danes do not take action, and it will be the end of Denmark's thousand-year old history.

The people, the voters, are the supreme authority in a democracy, and they should seize on the nail and address such a huge problem. They didn't, and it shows that mass democracy, as we know it, sings on the last verse. Modern voters are generally fearful and anxious and unable to show leadership and solve the nation's problems. They prefer to suppress and ignore unpleasant problems and think - or should we say dream - in more positive ways. 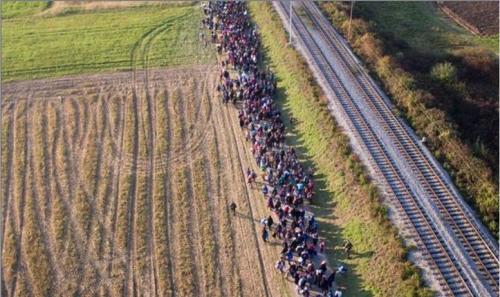 Migrants on the move in Denmark in 2016. Photo Twitter.

If one in last century had said that a party could win an election by promising more caretakers in kindergartens, we would have put it in the category with Jacob Haugaard's election promise in 1994. But this is actually what happened yesterday, June 5 2019, when the Socialist People's Party doubled its mandates on this election promise. Such problems should be solved by the boards of the kindergartens in question and not by the nation's parliament.

Instead of discussing the nation's major overall problems, such as foreign policy, defense, how to create economic growth and Greenland's development, the ignorant and easily manipulated voters held to more easily understandable cases such as tobacco prices, kindergartens staffing policies and the food preferences and eating times of asylum seekers and their children.

At this election, there was an unprecedented overbidding competition between politicians promising large groups of voters benefits at the expense of minor groups. In a mass democracy, it is precisely possible to vote for other peoples money. Political parties that pursue such a policy lose a few votes from the smaller groups from which the money is taken, but win many more votes from the much larger groups to which the money is distributed in various ways. The Social Democrats led the way by promising earlier retirement to "run-down people".

The basic idea of a democracy is that politicians present their the plans that they believe are relevant and necessary to the nation based on their deeply held attitudes, and it is then up to the voters to say yes or no. Over time, this principle has been degenerated by that some parties have turned the principle on its head, analyzing and exploring the voters' wishes and attitudes, and then design their programs and manifestos to these in the hope of increasing their votes. In doing so the whole public debate becomes an echo chamber and politicians are no longer are the nation's leaders as they should be, and they have transformed their parties into a kind of interest organizations for mutual support for the members' political careers. I have always connected Social Democrats with this particular practice, but today all parties have become a kind of social democrats. Even a representative of the Danish People's Party stated that "they had failed by sitting in the back of the climate bus." 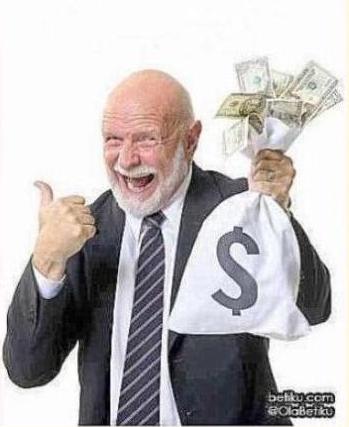 In a democracy one can vote for other peoples money. Photo behku.com.

Precisely Danish People's Party has been a very likeable experiment that has had my support for many years. They want to save Denmark from a Muslim takeover by acting across the political spectrum, winning the trust of the Danes and thereby gradually increase their influence and use this influence to reduce and halt Muslim immigration in a peaceful and democratic way. But voters' recent massacre of the party does not bode well for such peaceful development.

The party has acknowledged that within the framework of a mass democracy, protest parties can only grow to a certain size, because the bulk of voters are anxious and dearly wish that everything should continue as usual, why it is so effective to stamp unwanted parties as extremists, who want to overturn the voters' secure life.